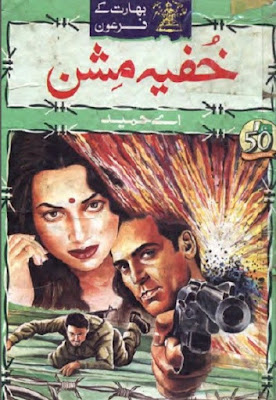 Bharat Ke Firon Novel pdf free download A Hameed is an action spy novel. Based on a secret mission plot in India which is an ideological enemy of Pakistan and its people.

Abdul Hameed also was known as A. Hameed was a notable novel writer and screenplay director of Pakistan. He was born in Amartasr India and later on migrated to Pakistan. He took his secondary education. Soon became the part of Radio Pakistan Lahore as a scriptwriter that was the first step of his life.
His debut as a novel writer was ‘Manzil Manzil’ which was a short story but was highly appreciated by the audience. He earned a figure of a romantic novelist. After that, he joined Voice of America and also started to write columns in the Nation Newspaper.
He tried to write on almost every aspect that’s why he doesn’t reflect a particular genre. He also wrote T.V dramas and his massive hit was Ainak wala Jinn. That was a famous T.V drama of the 90s telecasted on Pakistan Television. He also wrote Ambar Naag series of 100 novels that became so popular. That people search for this to read. He had also been awarded by Pride of performance award by Pakistan Government.
He had written more than 200 books. Urdu Shahr Ki Dastan, Urdu  Nasr Ki Dastan. Also, In which he has given information about the prose literature of many Urdu prose writers. Like As, from Banda Nawas gesu Draz to the recent prose writers of Daccen and Gujrat). Mirza Ghalib, Dastango Ashfaq Ahmad, and Mirza Ghalib Lahore mai are his most famous books.
freebooksmania provides the Bharat Ke Firon Novel pdf free download A Hameed and hopes that you will like it. It will be really joyful if you give us your feedback in the comment section.
***You May Also Like Books from A Hameed***
Download Now