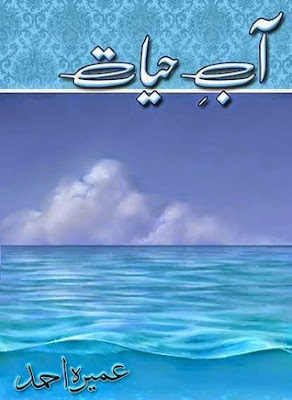 Aabe Hayat full novel by umera ahmed pdf is the second part of Pir e Kamil novel by Umera Ahmad. she has written it after five years of Pir e Kamil. This novel is again a big hit and a best seller. As the people enjoy the faith and love which has been emphasized in this novel of Allah and its Holy prophet.freebooksmania.
In this novel, the characters are the same as we see some more characters introduced in it. The story continues as Salar Sikandar and Umemma Hashim move forward enjoying a happy life with their children and as every life is threatened by trials they again face it too!

Aab-e-Hayat by Umera Ahmad pdf is 2nd part of “Peer-e-Kamil”. The story of the novel relates to the story of Peer-e-Kamil and further explains the married life of Imama and Salar. How they educate their children on both materialist and religious perimeters. This part defines the success of their children Maheen and Jibril. They adopt a girl as their daughter. This little act of kindness to raise up orphan child makes them proud in the future. The story of novel enlightens our minds about the growth of children. Maheen was a talented child. Salar was a banker, Maheen also has a tricky mind. He wants to become a businessman.

Salar becomes the head of the world bank. But he left this job, and he starts a project. Muslims world bank to stand a debt-free banking system. He and his five friends make an initiative and they invest together. Make this bank world number one bank. The writer has provided the perspective of the future. In 2040 the world bank destroys, and only Muslims world bank stands as a pillar. Maheen through his ideas he makes a website where he gets business ideas and sells them to different businessmen. Their elder son Jibril becomes a neurologist an MBBS doctor. Their adopted daughter becomes an international journalist. In this way, parents make their children successful.