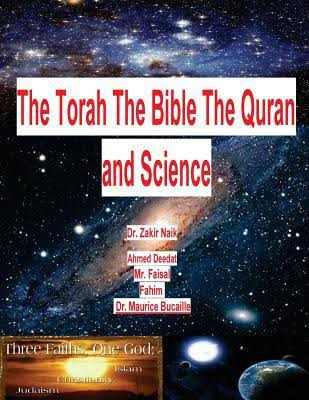 Book: The Torah the Bible the Quran and Science

That book describes the linking between the Holy Quran, Bible that Muslims use to believe not in its original condition, and modern science. After the dawn of modern physics, a lot of concepts got cleared about Islam. which that book elaborates in a proper way. moreover, it has not any sort of contradictory intentions.
Dr.Zakir Naik is a well known Islamic scholar that gained knowledge not only in Islam. But also directed his attention towards scientific mastery. He uses to prove his every statement by references and examples. By his radical thoughts, he uses to promote Islam and denounce every opposition that rivals make against Islam. Dr. Zakir Naik always brought the house down by being much realistic. In fact giving the true meaning of the religion Islam. As a public speaker, a lot of people became Muslim. Also, entered into the area of jurisdiction of Islam, by his strong views about Islam.


His famous book  Torah the Bible the Quran and Science “ is available on freebooksmania for free in PDF form for free.
***You May Also Like Islamic Books from Zakir Naik***