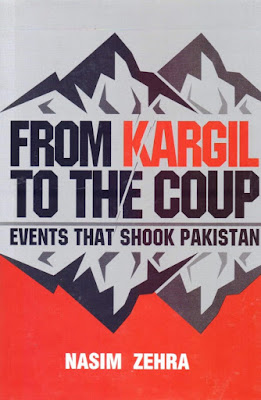 Book:- From Kargil to the Coup Events that Shook Pakistan by Naseem Zehra

From Kargil to the Coup Events that Shook Pakistan by Naseem Zehra is a historical war. In the account of Kargil’s adventure between two nuclearized countries India & Pakistan in 1999. Which left dark scars on Pakistani politics and as well on democracy. Kargil War is a fascinating topic to discuss as it was kept so much secret.
That even the ISI didn’t have the knowledge about this operation. The whole adventure was the madness of the four Generals whose ignorance about the facts. Just to gain fame almost drew the nations towards the Nuclear War. General Musharraf COAS of that time. With the other three members including General Gul Hassan planned to capture check posts of Kargil.
and to cut the Indian Supply line to Kashmir which would then ultimately be rewarded to Pakistan. The Analysis wings of ISI & MI have already ruled out. This plan and concluded this the success is uncertain due to harsh weather and crook path. This whole book came after a long time of the actual incident and really shred some light in the historical facts.
That created some digs and gaps between the civilians and the army. Which then doomed by Marshal Law in October. freebooksmania provides the From Kargil to the Coup Events that Shook Pakistan pdf download link below and hopes that you will like it.
***You May Also Like Books On Pakistan History***
Download Nownon- commercial and educational purpose only.
Download