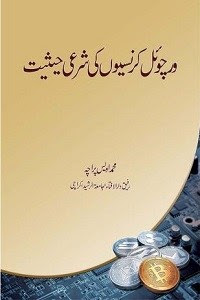 Virtual Currencies Ki Shari Haisyat religious Urdu book pdf by M.Owais Paracha is written on the virtual currencies. Which are very popular nowadays but what Religious scholars think about it is accounted in this book for those who are curious.

In the modern world, a new system of paying has risen. Which has attracted many people and economy of the various countries. There is various type of cryptocurrencies in the world from which Bitcoin, Zcash, Ethirum, Z cash. These are very famous. Because of the sudden increase in their values every person has wished that he must buy this currency to double his wealth.
This currency has also caused some serious troubles in the economy and crimes too. Also, many people have used it to convert their black money into white money. Further, this currency is neither trackable and has no physical existence.
This book outstandingly accounts this paying system and take a critical religious account. So, that people may understand its religious value because of many people who try their luck in it.
This book discusses how this currency works. How it is causing economical issues. What is the difference between this and other currencies.
freebooksmania provides the link. We hope that you will like it. Kindly give us the Review in the comment box.
***You May Also Like Books On Islamic isses***
Download Now