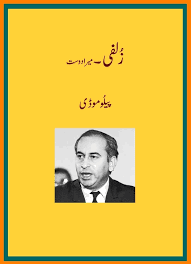 Zulfi My Friend by Pillo Mody in Urdu pdf is written by Pillo Mody who was an Indian politican and Zulfiqar Ali Bhutto’s college roommate. He wrote Zulfi My Friend by Pillo Mody in Urdu pdf. Mr. Bhutto was the most important political figure in the history of Pakistan.He was called the second man to save Pakistan.initially, he was a cabinet minister of Ayub Khan Marshal Law Administration. But after the separation of east Pakistan he was the only leader who again build the moral of all the nation,united the army and became the prime minister of Pakistan.He was the person who decided to make Pakistan an Atomic Nuclear State.He was also the creator of OIC. His achievements are countless but there are also some controversial aspects during his reign. Pillo Mody was the friend of Zulfiqar Ali Bhutto and then he wrote this book telling about the events, meetings and some facts about the personality of Mr. Bhutto which he saw by his eyes .Zulfi my friend ebook pdf will help you to know some other parts of Bhutto’s life and his struggle

Zulfi my friend in English:

© Copyright 2023 Free Books Mania
We use cookies to ensure that we give you the best experience on our website. If you continue to use this site we will assume that you are happy with it.Ok